Halerium models consist of Variables, Entities and Graphs. They are the essential building blocks to create arbitrarily hierarchical models.

We want to illustrate how this works by implementing a simple inheritance model, in which we look at the dependencies between the height of parents and the height of children.

We start by importing required packages:¶

Let us create our first entity, a person:¶

Now we have an Entity instance called person. In our simple world a person is fully defined by its genetic and actual height.
We can create a Template from this instance for future usage.

Now let’s get more specific and create a man and a woman:¶

OK, so what happened? We defined both man and woman as a person, but then we modified each of them in a different way. Essentially we are saying, the typical man is 175cm tall and the typical woman 167cm tall. However, the actual height is modified by genetic factors of this particular person as well as a random noise around the genetic predisposition.

We also created templates of man and woman.

Now, let’s define a Graph in which a man and a woman get a daughter.¶

Now let’s repeat that for a son:

Now we can create the Graph for a full family.¶

alice and bob are happy together so let’s make two children, harry and sally

However, we have not specified yet, that alice and bob are actually the parents of both of them. We can do that by linking:

Now we specified that the father in make_harry was actually bob and not somebody else.

We can inspect the family graph in the interactive GUI

Now we are done and can start to generate random family examples:¶

We start by creating a generative model.

The generative model is the simplest kind of model, that allows us to create artificial data and/or do forward simulations. For example we can get example samples:

Or the mean values of specific variables in our graph 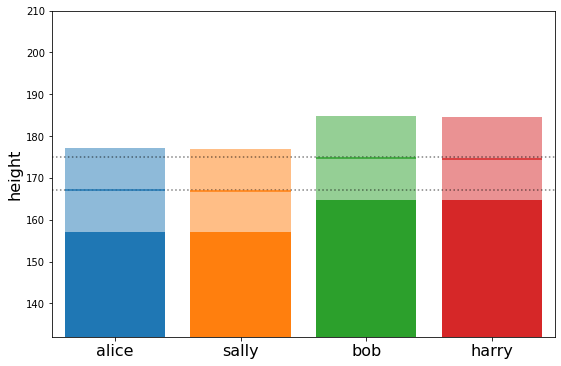 Now lets create a generative model conditioned to these data 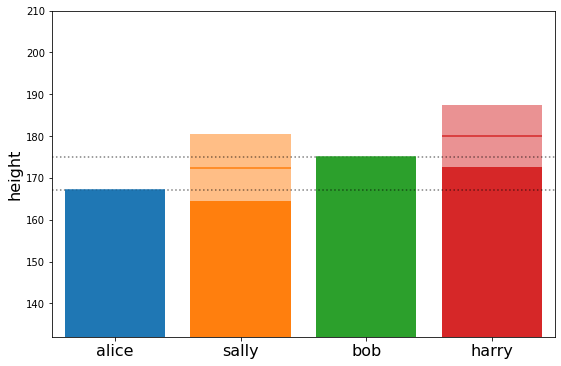 Now what has changed? We see that alice’s and bob’s height are fixed to the linked data. Their children are taller than both of them, since we gave both alice and bob positive genetic factors.
The standard deviation of of the heights of harry and sally was reduced, too. Since we now added information about their parents.

In reality we would not know the genetic_factor of both alice and bob, but just their heights. This time lets make alice and bob taller than average:

This time we used a posterior model. This model can solve any dependency, be it forward, backward or other. 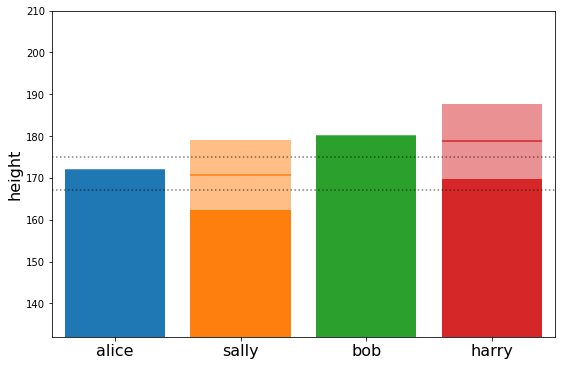 Interesting… we see that the expected height of harry and sally is taller that average but not quite as tall as their parents. This effect is known as ‘regression to the mean’. We can understand it better by looking at the estimated genetic_factors of alice and bob.

Both alice and bob were 5cm taller than the average man or woman. As we can see, 3/4 of this extra height were estimated into the genetic_factor. The rest was explained as a random fluctuation of the height of alice and bob around their genetic predisposition.

Consequently, the genetic factor of their children is 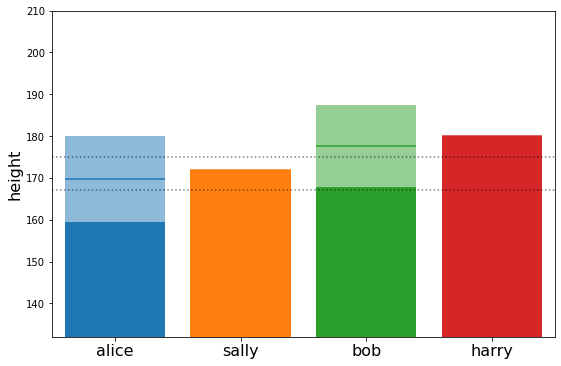 We see the regression to the mean also works backwards.