For many processes, the exact functional relation between input variables, i.e. the “features”, and output variables, i.e. the “targets”, is not known. In such cases, assuming a linear or low-order polynomial relation between the features and the targets may be a viable approach. The coefficients of the polynomial may then be learned from data. This approach is known as linear or polynomial regression.

We need to import the following packages, classes, and functions.

Consider a process with one feature “x” and one target “y”.

We first generate some data for this process: 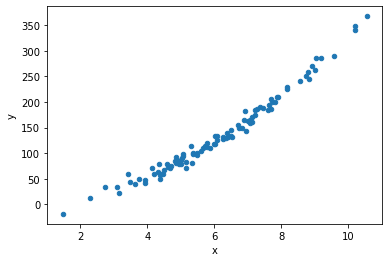 We can extract simple statistical properties such as the mean and standard deviation:

In the following, we assume we do not know the exact functional relation that generated that data.

Before we discuss how to quickly bulid a regression model using convenience functions, we create a linear regresssion model ‘by hand’.

We now train a MAPModel with the data.

We extract the posterior graph from the trained model and build a ForwardModel with it to compute predictions. 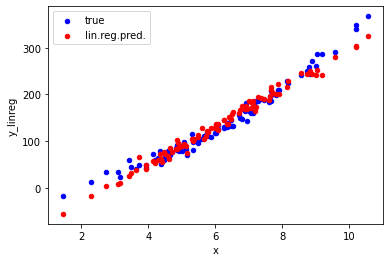 The plot shows that our linear regression model correctly predicts the trend seen in the true data for values of x between 3 and 9. For smaller or larger values, the predictions are significantly off due to the curvature in the true relation between x and y. To also capture that curvature in the data, we need to go beyond a linear model.

For example, this creates a graph for a quadratic regression model:

Using a Trainer and a Predictor, we can compute the predictions from our quadratic model and compare them to the linear predctions: 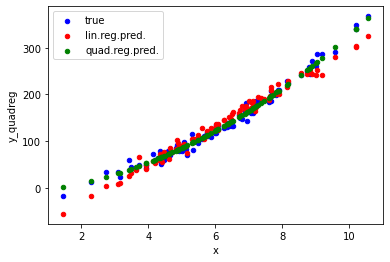 The first argument name_prefix is used to name the entities in the graph holding the regression parameters:

The argument inputs specifies the input variables for the regression. This can be either a single variable or a list of variables.

The argument outputs specifies the output variables of the regression, either as a single variable, or a list of variables.

The argument order specifies the order of the regression, i.e. the highest power of the input variables in the regression polynomial. For example, order=1 yields linear regression.

The argument include_cross_terms specifies whether to include cross terms when order>1. Cross terms are not enabled by default, since this can significantly increase the number of model parameters and thereby make the model hard to train without overfitting.

More on these and a numbe of further arguments can be found in the documentation for connect_via_regression.