Estimate probabilities with the Probability Estimator¶

The ProbabilityEstimator is an objective class in Halerium, with which one can estimate the probability of certain events.

To estimate probabilities you only need a graph and data.

For the examples below, we need to import the following:

Now let’s look at a certain set of data.

We evaluate the probability that the graph we defined would generate such data points.

We get the logarithmic probability densities for each data point individually. The higher this value, the more likely the event (=data point). We see that the data point with g.z=0 has the highest (least negative) value. It is the most probable event.

Let’s get some data for g.x and g.y instead of g.z.

Now we ask the probabilty estimator for the likelihood of these events.

We see that the examples where both x and y are +1 or both are -1 have the same likelihood. But it is very unlikely that one of them is -1 and the other +1.

This reflects that both x and y follow z closely. So they are expexted to be close to each other.

So far we have always asked for the probabilities for the whole graph. We can also ask for probabilities of some sub-structure of the graph, e.g. a specific variable. We just specify it in the call.

For example, we get the probabilities for g.x by:

We see that the probabilites of the three cases are much closer now. This is because neither g.y = +1 nor g.y = -1 is particularly unlikely. It is only the combination of g.x = -1 and g.y = +1 that was unlikely.

Since g.x and g.y are not causally connected in the sense that one leads to the other you get their independent probabilities if you ask for them seperately.

If some of your data are missing, the probabilities are calculated by marginalizing over the missing values. You can indicate missing value by np.nan.

Note that the class outputs logarithmic probability densities. If we exponentiate these, we get the density. 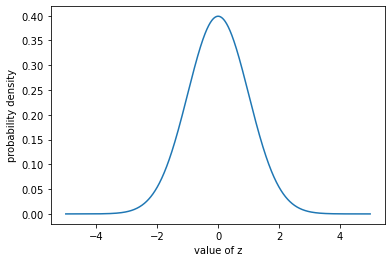 If we integrate that, we get 1.

Graphs are typically constructed out of normal distributions, but the chain of conditional probabilities can produce very different probabilities if non-linear functions are connecting the variables. 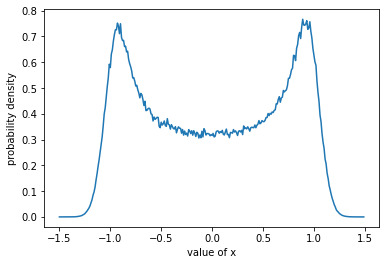 This probability density is clearly not a normal distribution, but it still integrates to 1.